Hard Rock Magazin: Can we talk a little about your Priest era? Tim Ripper Owens: Yeah! Hard Rock Magazin: How do you remember the "Priest times"? Is there anything which you consider a serious mistake? If you had the chance, would you change anything? Tim Ripper Owens: No, we had very good times. It was a really good line-up, with some good friends of mine. We really enjoyed it. All of us. We're still in contact. Unfortunately I couldn't go to a Priest concert since the reunion, everytime they come, I'm on tour. But we often talk or send e-mail to each other. Hard Rock Magazin: Don't you think, that someday in the future, you might do a guest appearance in a Priest concert? Tim Ripper Owens: No, never. Hard Rock Magazin: A couple of months ago you had a little arguement in the media between you and Rob. Was it a real thing? Tim Ripper Owens: I don't even remember it. What was it about? Hard Rock Magazin: Rob said something about your singing... Tim Ripper Owens: Yeah, I've got it. He said, that only a gay man can sing Judas Priest songs well. I can't sing them because of it. But it wasn't true, it couldn't be true, it's a silly thing, he would never say something like this. Hard Rock Magazin: After the Priest, you were a member of Iced Earth. In the beginning it seemed that you have a strong position in the band. But the end of this relationship wasn't nice. How could you be a gentleman during those hard days? Tim Ripper Owens: Well, in the beginning, Jon was a gentleman too. (laughs) Everybody knows me, everybody knows that I never say bad stuff on people. It's easier for me, to stay the same. And I'm more succesful since Iced Earth, after that story, only positive things have happened to me. Hard Rock Magazin: Are you in contact with the old Iced Earth members? Tim Ripper Owens: Well, while I was in the band, there were about 20 different musicians in the band. We're good friends with Richard Chrity. But not with Jon. Hard Rock Magazin: Jon said, that he kicked you out, because during the tour the fans convinced him to bring back Matt. Have you noticed anything during the tour? Tim Ripper Owens: No, nothing. I think the main reason was that he thought that the ticket sales and the album sales weren't good enough. Maybe he thought it was my fault. But now I'm not in the band anymore, and ticket sellings are worse. It's nobody's fault. But it's great that Matt went back. He's a cool guy and a great singer. Hard Rock Magazin: Let's talk about your new job, you're the singer of Yngwie Malmsteen. There were 2 Priest albums, 2 Iced Earth albums, will there be only 2 Malmsteen albums too? Tim Ripper Owens: Well, I don't know. It's a different situation, but nowadays I have more possibilities to do my own stuff. I can do much more other stuff. Hard Rock Magazin: People say that Malmsteen is a man, who is hard to handle. What do you think about it? Tim Ripper Owens: Well, I know him for a couple of years now, and our relationship is great. But that's my experiences. He is one of the easiest person, I've ever worked with in the studio. It's great. He says "awesome", if I do what he wants me to do, it's great. Hard Rock Magazin: What do you think about Perpetual Flame? Tim Ripper Owens: It's good! I mean the mixing could have been better, but I really enjoyed singing the stuff. There are also a couple of songs, which were recorded, but they haven't appeared on the album. They are awesome as well. Hard Rock Magazin: How did the Malmsteen fans welcome you? Did they accept you? Tim Ripper Owens: It seemed to be good, I mean, it worked pretty well. The concerts were great, we hope to go again, and do more and more. Hard Rock Magazin: Malmsteen's previous singers were a little bit different from you. Their voice was different. What do you think about it, it's a big challange for you, to sing the old Malmsteen songs, like the previous singers did? Tim Ripper Owens: You know, I'm me. It's the common thing in all of my previous bands. Me. My voice. In the Priest, in the Iced Earth, Malmsteen, Beyond Fear, it's me. They wanted me to sing, they called me to sing. Malmsteen had the chance to keep Doogie in the band, but he wanted something different. He wanted something new, he wanted me, my style, my voice. I like Doogie's voice, but my voice is totally different. But I think the singers before me were not the same too. My voice has maybe the most common style with Jeff Scott Soto's voice. I can't sing the old Malmsteen songs like the original singers, but I can sing them in my way, and it's great. People come to me after the shows and tell me, they love my versions much more than the album versions. I like singing. I like expressing my emotions with it, it's a great thing. I like my job at Malmsteen. 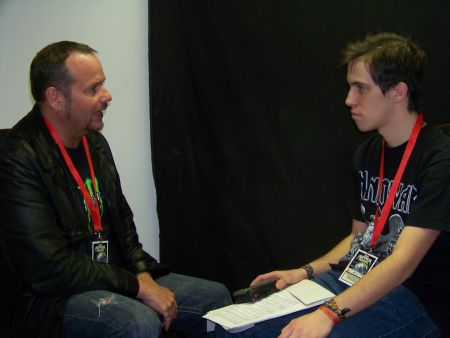